The Kingdom and The Powers

This past weekend I spoke about the Kingdom at VCC. I was asked by several people to provide the diagram that I drew on the flip chart during my talk. My friend Chris was nice enough to send me over a pdf of his notes. (Check out Chris' blog at www.churchpunk.com.) 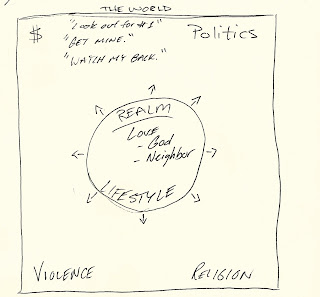 I will attempt to explain it briefly here, but if you have more interest, check out the weekend teaching at this link.

The rectangle represents the world...the way life really is. Imagine the diagram without the circle in the middle. There are powers at work in the world that shape and control us. In my mind, the four biggest powers at work in the world are economics, politics, violence and religion. These powerful systems seek to make us all pawns. They control us and reduce us to less-than-human playthings under their control. The four powers dance in and out of each other, creating the world we live in.

The reality of living under the control of these powers creates certain values or mantras that we live by. Chris listed a few of these at the top of the rectangle. Things like "Look out for #1," "Watch your back," or "I'm gonna get mine." That is the world we live in.

The circle in the triangle represents the reality-altering event of the coming of Jesus to earth. With Jesus came a new realm or reality that seeks to overcome the reality dominated by the fallen powers. Jesus's primary message centered on the current advent and future expansion of this new God-realm. Most translations of the New Testament use the word "Kingdom" for this "Jesus bubble" where he reigns and makes the rules. Jesus will often call it the "Kingdom of Heaven" or "Kingdom of God" or sometimes simply, "Heaven." My conviction is that regardless of what phrase he uses we are talking about "the current and future realm where God reigns with his people." This is my working definition for both of the words normally translated "Kingdom" and "Heaven" with a few minor exceptions.

When the religious leaders asked Jesus to give them the most important command in the Law, he responded that (in his realm) what matters most is love: loving God first, then other people. It is love that creates our lifestyle (culture, norms, values, etc.) The world (outside of the bubble) has its values. We have ours. Ours is love. Everything that we value and do within God's current and future realm flows from love. The commands of Jesus teach us how to live within a society dominated by love.

So, the "gospel" or good news in context of Jesus' primary message is that the system of the world is using and abusing people. We are slaves to that system and need to be liberated - not by some abstract concept of freedom - but by entering Jesus' realm and becoming God's servants. This is why Jesus' most common salvation language is to "enter" or "receive" the new realm (kingdom). We are saved when we leave (repent) the old system and begin to live within the new alternative kingdom.

This is the undercurrent of understanding needed to live out Jesus' commands like, "Seek first the realm (kingdom) of God and his lifestyle of love (righteousness) and all these things (food, clothes, etc) will be added to you as well."

Jesus believed that the realm of God had come to earth through him. He also believed that it had not fully come. It is now in the process of rapidly expanding. One day, after the resurrection of all things, God will destroy what is left of the system dominated by the powers and fully reign again over all of his creation. For now, we advance forward to that day.
Posted by Joe at 2:05 PM

You have an amazing anointment for teaching we plebeians very well so that what you demonstrate sticks:+)

At one point you mentioned how we know that we want to love, but that we always drift toward the fake and fraud of the other kingdom.

That resonated with me a lot. That's been one of the most telling signs to me personally of the reality of the war that's being waged. Seeing myself and my friends jump back and forth between the two kingdoms and the problems that creates. It's also convicting to consider that when I'm not a slave to God's Kingdom, I'm choosing to align myself with the "other kingdom" (I guess I don't often frame my pride, unforgiveness, etc in the context of serving the kingdom of Satan...but perhaps I should)

The way you framed it with the diagram was beautiful in it's simplicity. Helped me a lot to have a visual aid to remember clearly that there's one Kingdom set apart. I can never be reminded of that enough.

Great stuff Joe. Was proud of your boldness to call out the other kingdom.

The message this past week was nothing less than outstanding in fact, I think you could give the same message this coming week and no one would complain. I've learned that when you break out the easel and paper pad, I'm going to get my world-view adjusted by a couple degrees.

Thank you for all you do, and I'm in awe of the spiritual insights God gives you and how you deliver it with such a great style.