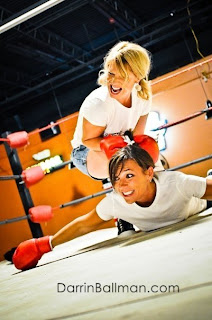 I just sent the following e-mail to the cast and crew of Hitting the Nuts. I thought I'd share it with the world...it's exciting news for all of us!
*content disclaimer - You are all invited to the premiere of the movie, but please know that it is intended to be a PG-13ish comedy with little redeeming value apart from inducing uproarious laughter. If SNL-style humor is offensive to you, you may prefer a quiet evening at home.
Dear Cast, Crew and Supporters of HTN,

I'm excited to announce that Hitting the Nuts was recently named an official selection to the Cincinnati Film Festival. This is an internationally known festival recently named one of the "25 Festivals Worth the Entry Fee" by Movie Maker magazine. (See the full article here if you'd like: http://www.moviemaker.com/festivals/article/25_film_festivals_worth_the_entry_fee_2009_20090714/ )

HTN will premiere at 8pm on Saturday, October 9th at the Hollywood Casino in Lawrenceburg, IN. (Cincy Metro). The festival and casino are also throwing a release party for us at Boogie Nights nightclub after the event. Or course, you are all invited and I hope you can come. We are still planning on theatrical screenings in Las Vegas, Kansas City and Louisville, Ky in the months to come if you want to wait for HTN to come closer to you.

There are about 500 tickets available for the event. Beginning Sept. 30th, the festival will begin releasing tickets for individual films for $10. Until then you can only purchase weeklong and day passes. Those are available now at the following link:

I'm also excited about the film leading into HTN at 5pm. It is the regional premiere of the SNL documentary "Saturday Night" produced by and starring James Franco (Spider-Man, Eat Pray Love). If you are interested in seeing that film and HTN, I would suggest a day pass - which is available now at the link above. If you are coming from out of town, the Hollywood Casino is offering a special room rate for festival attendees. Because the premiere is in a casino, attendees need to be at least 21 years old. However, there will be a second viewing of HTN at The Esquire theater in Cincinnati the following Tuesday. More details on that showing will be available in the days to come at http://cincyfilmfest.com.

Feel free to forward this email, post links on Twitter and Facebook and spread the word anyway you can. The best way to get the most current information about the movie is to direct people to the official Facebook page at http://www.facebook.com/pages/HTN-The-Poker-Movie/116926043028?ref=ts

We are working on DVD distribution now with positive feedback from potential distributors.  (A VP at a major studio watched the movie and told me he thought he was the funniest indie comedy he had seen in two years. He took it home and watched it again with his wife...) It will take a while to find the perfect match for distribution, but the process is going very well. The festival exposure will do nothing but help us get closer to a deal.

Obviously, it wouldn't be what it is without all of you. I can't wait for you to see the final product.