When I was a kid, I was into comic books. To be completely honest, I was more into the idea of striking it rich by getting in on the ground floor of some comic that would be worth millions one day. I had an Alex P. Keaton stage circa 5th grade when I was fascinated by capitalism. It still rears its ugly head now and again.

But beyond any 10-year-old investment strategies, I grew to like the stories in the comics themselves. I was a product of my generation. I loved G.I. Joe and Transformers. (No comment here about the current movies...must press forward...) Reading comics made one slightly superior to the kids who only watched the TV shows. "The comics are real," we would tell our TV-watching friends. If Destro dies in the comics, he's dead no matter how many times he parachutes out of his helicopter in the cartoons. The comics had ongoing story lines that seemed to stretch forward from week to week. I can clearly remember buying GI Joe #27 as a two-parter dealing with the previously untold origin and relationship between Storm Shadow and Snake Eyes. Stop me if I get too geeky. Too late...

The point is that I had to wait one month to see how the story would end. But eventually, the story finished. All stories do. Even yours. Your story is a comic book with only so many pages. Maybe 20 or 30 or 100. But someday my and your story will end. At least the part of our story on this side of death will end. Your story isn't finished yet.

This weekend at VCC we launch into a new series called Amazing (unfinished) Stories. We are gonna tap into our inner comic book geek for four weeks while also exploring what I believe is the deepest desire buried in the human soul - the desire to live a life that matters...to live within a story will ends well.

Jesus knows a thing or two about ending a story with a bang. He more or less invented the surprise ending. So join us this weekend...and bring a friend. It's never too late to change your story. 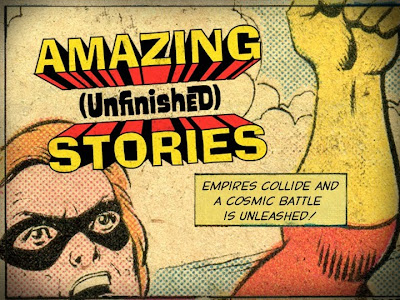 I've still got just about the whole GI Joe comic series in my basement if you want some extra, er, study material for this series.

You should totally wear this shirt up on stage.

Knowing is half the battle. The other half is red lasers and blue lasers.

I can never remember who shoots what color laser. I guess that's why I'm not a real American hero.

The sad thing is on Sunday I knew what the significance of G.I. Joe #27 was even before you mentioned it. They've begun to recollect those issues as graphic novels now. I think they are up to volume 4 already.

The last three weeks have inspired me to buy a comic book to read with my soon-to-be 4yo son. Who knew that they had Scooby Doo comics?