This has been a long week as we prepare for The {Re} Gifter at VCC. However, I was able to take an hour today and head over to Mason to sign a contract for my first published book. I'm happy to let you all know that Standard Publishing will be publishing my allegorical "fairy tale for adults" called A Tale of Two Kingdoms. 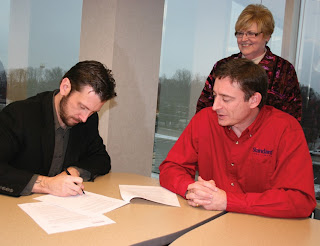 I started writing this book over ten years ago to coincide with a Kingdom teaching series at Apex. Through the years I have written in spurts here and there. I have one month to finish the manuscript which will come in around 35,000 words. From there it will be edited and eventually end up becoming a real live book sometime in 2009. If you would like a teaser, I read two chapters this summer at VCC during our Kingdom Cliffs Notes series. You can listen to the audio stream by clicking here.

I suppose today was a big day in my life, but in some ways it just felt like one day in a series of a decade of days that has seen this story evolve and refuse to go quietly into the night.

Here's the press release from Standard Publishing...it's humorous to see them attempt to explain who the heck I am:

Author Joe Boyd knows a powerful little secret: Stories for kids aren’t only for kids. On December 18, Boyd signed the contract for his upcoming book, A Tale of Two Kingdoms, in Standard Publishing’s offices. Written as an allegorical fairy tale, this “kids story for adults” unpacks some relevant realities of the Christian faith in a simple and entertaining manner. In terms of its allegory and mythos, A Tale of Two Kingdoms is written in a style somewhere between C.S. Lewis’s The Chronicles of Narnia and Spencer Johnson’s Who Moved My Cheese? Joe has had articles published in Leadership magazine, The Lookout, Christian Standard, and House 2 House magazine.

Matt Lockhart, vice president of product development, said, “We’re very excited to be partnering with an engaging storyteller like Joe.” A teaching pastor at the 6,000-member Vineyard Community Church in Cincinnati, and 1995 graduate of Cincinnati Christian University, Joe worked formerly as an actor in Hollywood. His on-screen credits include a recurring role on ABC’s General Hospital as well as starring in Breaking Vegas (The History Channel) and American Heiress (Fox).

A graduate of The Second City Training Center and The Groundlings, among the most prestigious comedy training centers in America, Joe is considered an expert in the world of improvisational comedy. He has performed in more than one thousand improv performances, including a three-year run as Michael Just in the Las Vegas/Broadway Company of Tony ’n’ Tina’s Wedding.

Joe is driven by the concept that story is one of the most powerful ways for communicating truth and that storytelling is foundational for any culture to find its particular meaning and place in history. As a result, he has a passion for writing and telling good stories. Standard Publishing is excited to break into this category of adult fiction/allegory with the release of A Tale of Two Kingdoms in November 2009.
Posted by Joe at 1:10 AM

This is great to hear! I still remember you reading parts of this of Apex. Congratulations on your continued success. My prayer is that God blesses this book to change the lives of all who come it contact with it.

Congratulations, Joe. I will be looking forward to reading your work.

Really happy for you, Joe. Looking forward to it.

I hope it is like the Shack, which i found to be one of my favorite recent books.

Congratulations Joe, May God continue to bless you, your house and the works of your hands.

writing a book is like owning a boat... there are two great days, the day you sign your contract and the day you get the first hard copy in your hands.

good luck with everything in the middle! congrats and i'm proud of you.