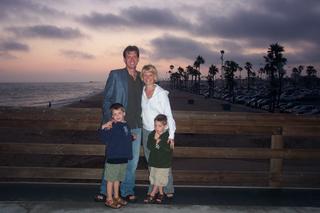 Tonight after dinner we drove down to Balboa Pier. It's still very strange to live so close to the beach. As you can see I picked up a very groovy vintage sportcoat from a thrift store next to an audition yesterday.

The reality of living in the one of the most expensive counties in America is starting to hit us pretty hard. We are weighing the options as to a third means of income. Debbie's considering a part-time job and I would love to find another job flexible enough to allow for auditions. It really seems as though God has had his hand in this journey...so I'm hoping he's got our back on the whole money thing. Neither of us have ever desired to be rich...but we don't seem to mind being middle class so much if you know what I mean.

I have a callback for a Nissan commercial tomorrow...I think. They usually call and let you know, though sometimes they just tell you at the audition. In this particular case, the casting director simply said, "Callbacks will be Monday between two and three." I assume he wouldn't have told me if I wasn't called back, so I'm going to show up and hopefully it won't be too awkward if he says, "Why are you here?"
Posted by Joe at 12:51 AM

Joe, Really like the new blog. Good luck in OC. Blieve me when I say God has your back with the money issues. He has had mine more then once. It is a great thing to know He does. Again luck and I am looking forward to reading more.