On some weeks of the month I have an all-day meeting on Wednesdays. This week was that week. It was a fine meeting. A few times each year I have an all day VCC Elders meeting. Today was that day. So, if you are keeping score at home, that's two all-day meetings in three days. For the record, I am not complaining. I'm going to go so far as to say that I actually enjoyed today's meeting. There are a lot of great people leading VCC and I'm honored to be one of them. I left rather grateful and excited about the future.

At the church Shareholders meeting last week someone prayed for me and told me to consider the following story from Acts to seek direction as we lead the church for the next season:

About noon the following day as they were on their journey and approaching the city, Peter went up on the roof to pray. He became hungry and wanted something to eat, and while the meal was being prepared, he fell into a trance. He saw heaven opened and something like a large sheet being let down to earth by its four corners. It contained all kinds of four-footed animals, as well as reptiles of the earth and birds of the air. Then a voice told him, "Get up, Peter. Kill and eat."

"Surely not, Lord!" Peter replied. "I have never eaten anything impure or unclean."

The voice spoke to him a second time, "Do not call anything impure that God has made clean."

This happened three times, and immediately the sheet was taken back to heaven. 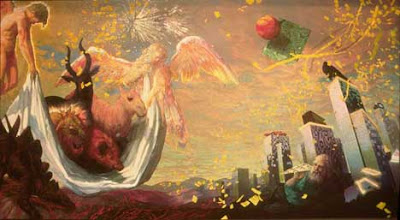 Peter eventually realizes that this vision is meant to convey that non-Jewish people may freely enter the Kingdom through Jesus. Though God once called only the nation of Israel to be his special people, now he calls all his people, Jews and Gentiles, "clean" through Jesus' work. This was the earliest controversy of the church. Some felt that Gentiles should basically convert to Judaism before following Jesus, while others (like Peter and Paul) opened the Kingdom to anyone with faith in Christ. The matter was more or less settled at a big wig early church meeting with Paul, Barnabas, Peter, James and the other leaders a few chapters later in Acts 15.

So what? Good question.

It's true that there aren't many Christians running around trying to convert people to Judaism these days. Here's the question that this story points me to now - is there anything in our/your church that, if God asked you to do, your response would be "Surely not, Lord. I have never done that." I think if we are honest, most American churches have a longer list of things that they will not do simply because they are a church. Maybe we need some reptile-eaters out there these days. Maybe some of our churches need to be bold and do things that churches aren't supposed to do. I don't really have thoughts on what these things are...I'm pretty sure it's not dealing drugs or making adult films. I just know that God is in the business of asking his people to do seemingly ridiculous, sometimes near scandalous things for the sake of his plan.

So...for you church leaders out there. what would be let down from heaven in your blanket?

i just read that chapter this morning.

How about snake handling ?

wow, something to chew on (pun intended). i need to salivate on this for awhile. i have been trained not to think this way so coming up with fresh ideas to what you are describing is quite difficult. i think i need to go up on my roof and pray. i'll be eager to see what others suggest. if the HS directs i'll also pass along a suggestion.