I was only actually on the set today at General Hospital for 15 minutes. I was at the studio for about four hours. I'm glad that I'm going back the next three days to try to understand it all a bit more. Soaps are definately different than the film and tv I've done so far. There's a good chance that everyday will be non-speaking. They originally weren't sure, but after seeing it all today I'm not planning on it.

However, I am getting to read for the casting director on wednseday before work. I'm not sure why really. I asked a guy today who has been doing background and "under five" (small speaking parts) at GH for years about it and he seemed surprised. He says its rare for them to do that. Who knows? I shouldn't try to figure that stuff out. Just enjoy being there and whatnot.

I will be able to make my Punk'd auditon tomorrow as well as an industrial callback. I don't report to GH until 7:00 pm and should only be there a few hours.

Spent a few days in Las Vegas for Thanksgiving and had a good time. We decided to drive back at midnight on Thanksgiving which was a good decision in terms of traffic, but my sleeping schedule is a little off.

Debbie has a big party that she booked today so I'm planning on taking the boys to see Chicken Little. It's always a crap shoot taking them to the movies. Sometimes they love it, but half of the time we leave early.

I taught at Lifelines last night from Romans 13. It was just one of those nights when it felt a little rough. I usually have five minutes to teach on Birthday night (the last friday), but I had 25 minutes this week. Just felt a little off, but I'm sure something good was happening underneath. I was a little sleep deprived and carb-hung over from Thanksgiving.

I'm excited about working next week. I don't really know what to expect. I also booked a little industrial video that shoots friday. So it looks like I will be on General Hospital Mon-Thurs then working again on Friday. I have an audition Tuesday for Punk'd on MTV as a series regular. (One of the guys who tricks the celebrities...) I hope that I can work it around my shooting schedule. I generally do very well at improv based auditions. One of the most frustrating things about it all is that everytime I book I have to pass up auditions. I think that's a big part of why it is so hard to work constantly as an actor.

I was hired to work on General Hospital all next week...very small role, but five shows in four days. I play a doorman. Never been on a soap set. Never really watched a soap for more than five minutes...so this should be interesting.
Posted by Joe at 7:10 PM 3 comments

UFO's , Jessica, and a new car

Much has happenned since my last post. Nothing too major, but all the same...

I had the callback friday for the UFO series. Crossing my fingers on that one. It went well...not stellar, but well. Afterward I ran into Jessica Simpson at the Arc Light Theater bookstore. She was reading US weekly and talking to her mom on the cell phone about the story in the magazine being untrue. Rather surreal, but left me pretty much unphased.

The van is still in the shop, but it will only cost $300, which is good considering they quoted me anywhere between $200 and $2000...I have a rental pick up truck now which is quite the gas hog.

And...we went ahead and bit the bullet on the new car. Traded in the Montero after a solid five year run for a Toyota Corolla. Not a sexy car, but very practical and much better suited for my travels. The savings in gas will nearly pay for the car payment each month.

Today was one of the busiest days since moving here. I had three auditions in LA this morning. They all went very well and, though I rarely say this, I'm almost certain that at least one of them will call. They were smaller projects and the directors were present. If they don't come through, no big deal. But a few of them are multiple day shoots starting after Thanksgiving. After my auditions I taught at church for Tim and followed that with my first performace at The OC Crazies. Good times. Debbie and the kids came. Aidan said I was funny. Eli said it wasn't fun because he couldn't run in the theater. Fair enough.

Tomorrow I teach three more services and follow them with the monthly Lifelines leadership meeting at Steve's house...then, Lord willing, I sleep!
Posted by Joe at 1:41 AM 2 comments

My van door fell off and other stuff...

Quite a day. I had an 8:30 call this morning at a house in North Hills, north of LA, for the Age of Empires III commercial. It went great, but on the way there the sliding door in the minivan flew open and broke on a freeway exit ramp. I was pulling off of the freeway because I could tell the door wasn't fully latched. As I hit the gas to turn onto a street the door flung open and came off track...losing a few bolts. I managed to fix it enough that it stayed "on", if not closed, for the drive to LA. Basically, I drove over 100 miles today with the door stuck open though. I'm getting an OK paycheck for the commercial, so I'm hoping it will be a wash with the repair bill...

ANYWAY...this was a 60 second comedic spot...very funny in a silly "Bill and Ted" way. I wore an authentic British Red Coat soldier costume complete with knee-high boots, fake sideburns, funny hat and a real sword. They had my measurements all wrong (too small), so I could barely breathe, but it was good fun all the same.

I also found out today that I have a callback Friday to be the host of a new TLC/Discovery Channel show about UFO's. I feel strangely qualified for it. They are looking for a real host, not someone playing a character, so I would be my skeptical self investigating UFO sightings all over the USA. Here's hoping it goes well...would be a regular TV gig that could exercise both the creative and scientific sides of my brain.

That's all for now...gotta go to bed so that I can get up early and take the van into the garage...
Posted by Joe at 2:06 AM 0 comments

Finally! I actually booked the old fashioned way: through my agent. I have booked five projects since leaving Vegas but all of them were leads that I dug up myself, or someone who knew me throwing me a bone...thanks again, Gregg.

I booked a commercial for a video game (Age of Empires III) that shoots next week. I play a colonial British soldier...go figure. It is non-union, so no residual money but it is a definate monkey off my back. It's nice to think back to that full casting office and know that for some reason I was chosen. It means it can happen again.

I pre-spent some of the money on "Charlie and the Chocolate Factory." I took the boys to see it in the theater and they both loved it. They are watching it with Deb now. There is something about giving a gift to someone you love on a regular day...not Christmas or a birthday. It makes it more real.
Posted by Joe at 12:24 AM 1 comments

Well...ten auditions in ten days. That's really good. I'm getting out there and I'm actually doing very well in each audition. I could use a booking for the old self esteem though.

I have joined the "OC Crazies", the longest running improv troupe in Orange County. They have their own theater and they are directed by an original member of The Groundlings, where I trained a few years back. My first show with them is in two weeks. It will be nice to get back to where it all began three years ago. Improv is still the thing that is the most fun for me. It's good to be back.

The TV pilot shoots in three or four weeks.

All else is well. Family is good. Life is moving fast.
Posted by Joe at 1:10 AM 0 comments 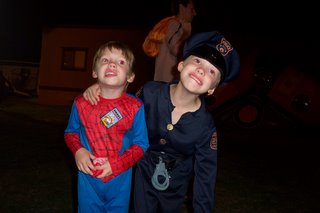 This may not be the prettiest picture, but it says something...Eli went as a policeman. He was accidentally a sexy policeman because we haven't done laundry and didn't have any clean undershirts, so he showed a little chest. Aidan was a pretty cool spidey. We went to the OC Fairgrounds for a big Halloween bash and they loaded up on candy. Pretty cool.

Uncle Phaph (the spelling is uncertain...that's Deb's brother Dave) and Aunt Sara are here but they leave tomorrow. It's been a nice visit.

Four auditions in 24 hours and I'm a little fried. I'm starting to recognize other actors at auditons now which is nice. We talk about the parts we aren't getting together. It's struggling actor bonding-you wouldn't understand.
Posted by Joe at 1:56 AM 21 comments