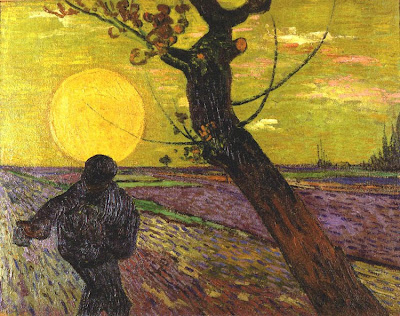 The theology of creativity is interesting to me. In Romans, Paul talks some about what theologians call "general revelation."

"For since the creation of the world God's invisible qualities—his eternal power and divine nature—have been clearly seen, being understood from what has been made, so that men are without excuse." -Romans 1:20 (NIV)

"Specific revelation" would be defined as a direct communication from God to humanity. For the Jew and Christian, the Torah and other Scriptures would fall into the specific category. Of course, the person of Jesus is the ultimate specific revelation for the Christian. But apart from these divine interruptions, Paul says that we can generally become aware of God through "what has been made." We see a Creator - a Mind - an Artist. This is enough to move most of us from atheism to theism. There must be something...or someone other than us out there. His "divine nature" is tied up in "what has been made." Who he is created what we see.

Early on in the creation account of the Torah we stumble upon an interesting passage about mankind:

Then God said, "Let us make man in our image, in our likeness, and let them rule over the fish of the sea and the birds of the air, over the livestock, over all the earth, and over all the creatures that move along the ground." So God created man in his own image, in the image of God he created him; male and female he created them. - Genesis 1:26-27 (NIV)

There is mystery here on a few fronts. The subject/verb tense disagreement is among them. It says literally that a very singular God speaks to himself as if plural. Some have used this to hint toward the Trinity, but it seems a bit of a stretch to me. The greater idea may be that he is beyond language - beyond us. None of this is my point for today though - it is rather the claim that human beings were originally and continually created in the image and likeness of YHWH.

These two words will be repeated again and again in the Torah - but mainly in the prohibitions against making or worshiping false Gods. The people of God were not to make a god in the image or likeness of an animal or anything else that was thought to contain the essence of deity. The Living God doesn't need or desire idols made of stone or wood, but He does have something to carry his essence in the world - people. A Living God has living image bearers. We are his likeness.

It is worth pondering what we know of God looking at only the text up until Genesis 1:26. We know he is powerful - that he has authority. It is clear that this is part of the image we have been given. In context, we see that since we are created in his image, we are to rightly rule over the earth.

But the secondary assumption we can make is that the God of Genesis 1:1-25 is at his essence creative. He is the Creator. To be endowed with his image and likeness is to be little creators. To create is to be human and to be human is to reflect the image of the divine.

The first person in the Bible to be described as "filled with the Spirit of God" may be someone you have never heard of. It wasn't Noah, Abraham, Joseph or Moses. He is first mentioned in Exodus 31:

"Then the LORD said to Moses, "See, I have chosen Bezalel son of Uri, the son of Hur, of the tribe of Judah, and I have filled him with the Spirit of God, with skill, ability and knowledge in all kinds of crafts - to make artistic designs for work in gold, silver and bronze, to cut and set stones, to work in wood, and to engage in all kinds of craftsmanship." - Exodus 31:1-5

This is worth meditation. Throughout the Scriptures, God will fill people with his Spirit to give them special power or wisdom. But here we see clearly, that he also fills artists with the Spirit to create art for his purposes. Art and creativity are spiritual.

Not all of us are as gifted (talented?) as Bezalel, but all of us are creative beings. It is part of what it means to be human. When life becomes so predictable or monetized or safe that there is no room for creative explosions, we lose sight of who we are. We lose touch with the God who creates.

Most Christians I know want to be spiritually disciplined. This usually means they want to pray, read the Bible, attend church events, help the poor, etc. These are good things. But below is a list of some other spiritual disciplines. Maybe trying one this month would be a good thing for you...

I'd invite you to go over and look around. Over the next few weeks I plan on re-visiting some posts on this blog that apply to the issues associated with the book - mainly storytelling, Kingdom theology and creativity. If you wanna help spread the word about the release, this new site is the best place to send people.
Posted by Joe at 2:46 PM 0 comments

She is now what she will always be. 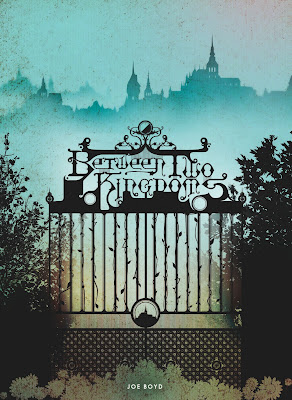 My first book, Between Two Kingdoms, goes to print this week. It is to be released sometime in March. This fact has caused a lot of reflection on my end this week. The first words that would become Between Two Kingdoms were hastily typed out in the fall of 1999 for a message series called "A Tale of Two Kingdoms" for Apex Church in Las Vegas. It was a teaching series through the Sermon on the Mount crafted shortly after reading Dallas Willard's The Divine Conspiracy, a book that would change my understanding of the gospel forever. My friend Jennifer Parks read each chapter after I would speak. It was an engaging time of growth for Apex. I have fond memories of that time in my life.

Writing the story was a way to try to contextualize my emerging theology. I grew up with what Willard called a "gospel of sin management" and was replacing that gospel with the gospel of the Kingdom. I was growing up in my faith and this fairy tale/kid's story was the most adult thing I had ever written.

I never intended to publish it. It was part therapy, part sermon illustration, part history of our little church plant. In 2000, I wrote a few more chapters during a vacation. Mainly out of boredom. Then it rested.

The story slept on the hard drive of an old Dell laptop while my life continued without her. She slept through the harder years of Apex, when we aggressively moved toward house churches and wrestled with the thousands of practical implications of discovering the centrality of the Kingdom. She slept through my resignation from church work and my years as an entertainer in Las Vegas. She slept through our move to Los Angeles in 2005 and first few years of our life there.

Then one day in early 2007, I woke her up. I had to find my old laptop and dig around, but there she was. Just the way I left her. Snoozing away - grammatical errors, missing plot points and all. I decided to share the story (what is now the first nine or so chapters) with my new church community at The Crossing in Costa Mesa. They received her kindly and resurrected a puff of life back into her.

Then the most unexpected thing happened - God picked us up by the shirt collar and brought us back to Cincinnati. So we came - with all that was ours - some cheap ikea furniture, a Toyota Corolla with manual locks, a few boxes of toys...and a half-finished fairy tale.

After a year or so, I shared a chapter of the story with my new family at The Vineyard. The following week I spoke at a conference at my alma mater. There I met Dale Reeves, the Director of Acquisitions at Standard Publishing. We talked and exchanged emails. Somehow my story came up...so I sent him what I had with little expectations.

The folks at Standard liked her - sort of. She was a little rough around the edges...and way too short, but she had potential. So they agreed to publish her. That was August, 2008. Nine years after her first incarnation. That is when the hard work began - I had to actually finish the story. I fearlessly immersed myself back into a world that I had created a decade earlier. I had changed a lot in ten years. She had not changed at all. She was going to have to. Exactly one year ago I turned in the "final" draft of the extended story to Standard. Then it went to edit. For the last twelve months the story has bounced back and forth between several editors and myself. At last, it landed in the capable hands of Laura Derico, a lifelong friend of mine. She massaged my words into something exponentially better than I could have ever done alone. I learned that editors probably never get the glory they deserve on projects like this.

Last week I sent in a few final notes and that was the end of it. She is finished. If I had to guess, less than ten percent of those first words written in 1999 remain. She evolved. And like me, she has grown up over the last eleven years. I hope that lots of people like her...but even if they don't, I do. She's not perfect, but she has persevered...and she has now done something I have never had the courage to do. She has, for the rest of time, elected to stop evolving. She is now what she will always be. She is finished.
Posted by Joe at 7:38 PM 5 comments