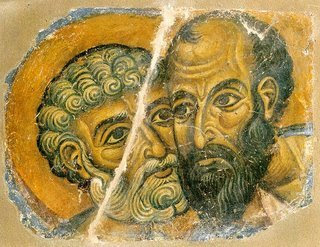 We Christians disagree about most everything, especially us Protestants. It's in the very label we go by - Protestants are the those who "protest." One of us protested 95 Catholic positions 500 years ago and we never stopped protesting against one another since. That's why it seems like there is a Christian denomination for every three people on earth. (There are at least five varieties of church on the drive from my house to the building where my version of Christianity worships.) It is truly amazing and somewhat embarrassing that the people who believe in "one Lord, one Faith, one Baptism, one God and Father of all..." are splintered in every conceivable way. Most all of our disagreements stem from how we interpret one book - The Bible. (And many of them actually come from how we interpret just a few verses in that one book.)

At this point I have a confession. My instinctual response to controversy, especially Biblical controversy, is to keep my mouth shut as long as possible. There is some wisdom in this, but also some cowardice. Sometimes it has meant that I will close my mind as well as my mouth. My personalty (INTP) seeks understanding more than answers. I am most uncomfortable when I am sure that I am right about something. I prefer to not have an opinion so that I can somehow foster unity among those who disagree. I am now seeing that my methods are probably the wrong directions to try to get to the right address. I have decided it is time to buckle down and figure out what my opinion is on several issues that I have basically ignored.

As a result, I have been thinking and reading a tremendous amount of late about some issues that might be thought of as controversial within the scope of Evangelical Christianity. I came across something foreign to me that I thought was very helpful. Not having ever been a Presbyterian, I had little knowledge of the specifics of their recent history until stumbling upon some Presbyterian writers and scholars this year. In doing so, I discovered the UPCUSA Guidelines for "a positive not restrictive use of Scripture in matters of controversy" written in 1982. I wanted to submit them here as a starting point for any of you currently in a situation where it could be beneficial:

1. Recognize that Jesus Christ, the Redeemer, is the center of Scripture. The redemptive activity of God is central to the entire Scripture. The Old Testament themes of the covenant and the messiah testify to this activity. In the center of the New Testament is Jesus Christ: the Word made flesh, the fulfillment of Israel's messianic hope, and the promise of the Kingdom. It is to Christ and the church witnesses. When interpreting Scripture, keeping Christ in the center aids in evaluating the significance of the problems and controversies that always persist in the vigorous, historical life of the church.

2. Let the focus be on the plain text of Scripture, to the grammatical and historical context, rather than to allegory or subjective fantasy.

3. Depend on the guidance of the Holy Spirit in interpreting and applying God's message.

4. Be guided by the doctrinal consensus of the church, which is the rule of faith.

5. Let all interpretations be in accord with the rule of love, the two-fold commandment to love God and love our neighbor.

6. Remember that interpretation of the Bible requires earnest study in order to establish the best text and to interpret the influence of historical and cultural context in which the divine message has come.

7. Seek to interpret a particular passage in the Bible in light of all the Bible.

As I look back on the hot button issues that have defined much of Evangelicalism in my lifetime, I can't help but think that a slight glance over to the left at our Presbyterian brothers and sisters might have brought about more civilized and productive discussions. I have personally witnessed, and probably enflamed, debates that ignored all seven guidelines above. As I currently seek to bring a little more resolution on some Biblical passages in which honest, God-loving Christians disagree, the seven guidelines above give me the framework to press forward.

What an unprecedented witness could emerge if Christians genuinely learned how to disagree on important issues without labeling, excommunicating, damning or hating one another. It seemed, after all, to be a great hope of Jesus - that others would know we are his followers because of the love we have one for another.
Posted by Joe at 10:37 AM 7 comments

Time to Make a Movie!

We are happy to announce that principal photography will begin on our next film, A Strange Brand of Happy, on August 15th. The movie is a romantic comedy starring Rebecca St. James. It's very funny, but it will also start some serious conversations about the big questions of life. We are all crazy excited to begin shooting.

If you live in the Cincinnati area, we would love your help. Making a low-budget movie like this one is an amazing collaboration of hundreds of people who come together for a common goal. The most pressing need we have right now is providing really great food for our cast and crew. We also need extras, props and a few big ticket items - like an RV and a private jet for Brad Wise, our pretentious director. (OK, we don't need a jet. But the RV thing is true.)

Head on over to the website for A Strange Brand of Happy and let us know how you'd like to be a part of it all.
Posted by Joe at 2:15 PM 0 comments