We had the Lifelines leadership community over this evening. It was very refreshing. We had two deaths in the community this weekend, so it was especially good to be together.

I hope to have lots of exciting news to report in the coming days about the film I am producing. Stay tuned for details.
Posted by Joe at 1:23 AM 0 comments

Yesterday I threw up for the first time in twelve years. It wasn't fun. I was really out of practice. Today I pretty much feel better. Thanks for your concern.
Posted by Joe at 11:38 PM 2 comments

From the set of "THE CURE" 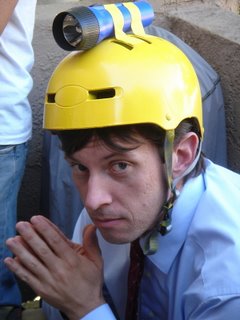 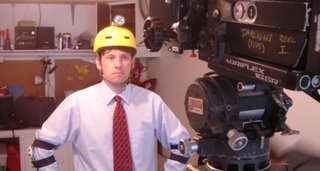 A few pics from my work today on my friend Sidney's film...yeah, it'a a comedy.
Posted by Joe at 2:25 AM 0 comments

Well...tomorrow I had booked a principal role on a soap opera called The Heiress for the new MyNetworkTV channel. They called this morning to say that they are still using me but the shoot is postponed for a week or two. Turns out to be a good thing because I had an audition come in for CSI:NY tomorrow. That's a little odd, because my worst audition of the year was for that show a few months back. Maybe it wasn't as bad as I remember. I'm reading for a pigeon wrangler who gets murdered. So...yeah. It's hard to know exactly how to dress for a pigeon wrangler, but I think it involves a warm jacket.

I've agreed to play the lead in my friend Sidney's senior thesis film at Champan University. It will shoot Friday, Saturday and Sunday. Fun part.

The short film that I am producing (My Take) is going to shoot in November. I'm also working everyday on the feature. Generally, lots of good things happening with it.

I try to post two or three times per week...it's really hard to believe that it has been seven days since my last entry. In the last week I have started and completed a film called PERSPECTIVE. It's an art-house piece going the festival route. I played the lead...a guy who loses his job and has to deal with the pressures associated with that. It was a good time and I met some really cool people whom I hope to work with again.

I am down to the final few guys for hosting the Ultimate Poker Championship TV show. I got an email yesterday that said they had not made a decision. I feel like I would have heard today if I got it, but you never know for sure. It would be over 100 shows and create some stability...would be an interesting thing to have happen. I'll post when I find out.

And I am actively seeking investors for my feature film in my spare time. I took a whirlwind trip to Vegas...less than 20 hours total, to meet with several people who are helping me secure funding. We're movin and grovin with this thing. It's going to happen. The official website for the film will launch Oct. 25 and I will be sure to post a link here. Until, then you can check out the myspace page on the side margin -->

Personally, the family seems happy. The boys are taking tennis lessons after school on Mondays and they both really like it. For those of you who know mom and dad, I'm excited to announce that dad took a new job in Kansas City with a different oil company. We've been praying about that for a long time. It will be odd to not visit them in Columbus, but it's a very good thing.

Whew. Today I had three auditions. One was to host the next season of The Ultimate Poker Challenge. It went very well and would be an interesting gig...100 shows over the next year. I also booked a film today that shoots Friday, Saturday and Sunday. I already have two days of work scheduled for next week...a day on General Hospital and another on a sit-com.

Production stuff is still ramping up too. I actually made a to-do list today for the first time in a decade or so.

I want to get back to telling stories at Lifelines so I've decided to spend three weeks in the book of Judges. Lots of blood, violence and questionable sexual ethics...it's everything you could hope for in and Old Testament book. It's all about how our lives get in the same pattern of calling out for help, getting help, forgetting that we need help, screwing up our lives by refusing to be helped, and then calling out for help again. I think it relates to recovery.
Posted by Joe at 1:45 AM 1 comments

I'm loving the producing work that I have been doing the last few weeks. It uses a different part of my brain and skill set. Things are coming together quickly for "IN TNE NUTS...THE TRUE STORY OF THE 2007 SCOTT COUNTY SERIES OF POKER." (See the official myspace link to the right -->) I'm in the process of building a team for pre-production now, and it is exciting to see friends of mine from all different seasons of my life jumping on board. We are seeking investors now, which actually is enjoyable if you believe in the project. A few recognizable actors are reading the treatment this week...all good things.

A few auditions this week as well and back on General Hospital for the first time in a long time next week. I booked a web-based sit-com that shoots in a few weeks. I'll post the link when it's up.