My Bacon Number is 3

I was just informed that I have an official Bacon Number on imdb now...

My first feature film as a producer is offially in pre-production! It's called HITTING THE NUTS...THE TRUE STORY OF THE 2007 SCOTT COUNTY SERIES OF POKER. I've created a myspace page for it and I will post updates here too. The next few months will focus on finding investors...it's considered "ultra-low budget" with a total budget of $269,000. It's a poker comedy set in Scottsburg, IN...which happens to be my lovely wife's hometown. It's kind of Rounders meets Spinal Tap, inspired by Napolean Dynamite. It'll be fun.

If you myspace, go to www.myspace.com/hittingthenuts and befriend us.

Some fun people are jumping on board already...
Posted by Joe at 7:20 PM 0 comments

OK...it got better. There was a scene in which I literally sat up in my chair and clapped my hands. (Luckily everyone else in my house was sleeping.) I have to admit that I love the show in large part because it hits every major interest and passion of my life in one show, even including the atypical Christian working in Hollywood.

Why do I do this again?

I sort of freaked out this week. I'm not sure why. On Monday I went down to San Diego for my second audition for the TV show "Art of Betrayal"...the role of a policeman. They immediately called me back to read again at 2:30 pm. I did very well in the first reading and not as well in the callback. This happens sometimes. It happened to me last week too. I was called back for a TV show called Mystery ER on the Discovery Channel. I nailed the first reading and not the second. I don't think in either case that I totally blew it...but I could have and should have done better. In golfer terms, I get the yips at callbacks. I choke on putts I should sink simply because the stakes are higher. Not always...but recently for some reason.

So for a few days I looked around on monster.com and craigslist trying to imagine something else I could do...

Yeah. There's not really anything.

Today was better...coming out of the funk. I wrote a seven-page script that I'm proud of. It will be submitted for use in a 48 hour film festival in December. My agent finally called after a week (in the middle of my funk, I assumed they had fired me and forgot to tell me.) I have two auditions for the show Vanished (Fox) tomorrow ("policeman" and "security guard")...I've already read there once this season as well. It's a good sign when they bring you back like that. (Based on my most recent auditions, maybe I should consider a career in law enforcement.)

So, I'm back off the edge. Ironically, I received several e-mails from long lost friends this week telling me how proud they are of me for following my dreams and all that...I figured quitting this week might be too hard on them anyway. And by the way, following your dreams sounds so awesome until you do it. Then it just feels really hard and a little pointless...and kind of like you should get a real job...and, to be honest, sometimes out of nowhere...it does feel a little awesome.

On a side note, I've been listening to the audio book BLINK from the other of THE TIPPING POINT. It's pretty cool...there is a whole chapter devoted why improv is the greatest thing people can do together. (My interpretation-but it's not so far off.)

To my Lifelines friends...my Vanished audition is at 5:00 in Hollywood so if I'm a little late tomorrow night, talk among yourselves and I'll get there asap.
Posted by Joe at 12:33 AM 1 comments

I was looking forward to it, and blown away at the pilot last night. Enjoy.
Posted by Joe at 5:00 PM 2 comments

I'm sitting at the Diedrch Coffee on 17th Street in Newport. There are forty of these coffee shops in Orange County. Diedrich's is one of my favorite things about living in OC. Sitting at the Diedrich's in Laguna Beach was one of the fondest memories of my early vacations here with Debbie before we had kids.

They just sold to Starbucks. All 40 stores.

I shouldn't let this make me sad. It really sucks though. I've never been a Starbucks hater...I just like this place better-the coffee tastes a little better, the people are a little friendlier and the wireless internet is free.

I might have to start hating Starbucks for this. Only time will tell.

If the prophet Nathan were here, he would march up to Seattle and tell Starbucks the story of the one little ewe lamb...but, alas, Nathan is gone...and so is Diedrich's.

This week went fast. I had five auditions on monday and tuesday, drove to Reno all day tuesday, shot the Harrah's gig and drove back yesterday, got home around 4:00 am, slept in, and here we are. Tomorrow is Friday already.

I woke up with a terrible hang over, which is really odd since I didn't drink anything. I think I'm getting a little too old to stay up 22 straight hours.
Posted by Joe at 7:13 PM 0 comments

I booked a print job next week in Reno for Harrah's Casino. It shoots Wednesday, so I'll be traveling up on Tuesday and back late Wed. night. Nothing too exciting, but a gig's a gig.

I read for for a web-based sitcom today and just got the callback for it. A lot of networks are experimenting with this sort of thing this year...It will be interesting to see how they all pan out. I hope they work...it means a lot more work for people like me.

I now officially have six different projects that I am working on either as a producer or writer as well...keep the plates spinning until all but one breaks...my theory lately.
Posted by Joe at 10:27 PM 0 comments

So I met these two young film makers named Sam and Syd who are students over at Champan University. I did a short film for them last year...a piercing coming of age drama with significant social implications. OK, it's about passing gas in an elevator. Click here to see it on youtube.
Posted by Joe at 11:58 PM 2 comments 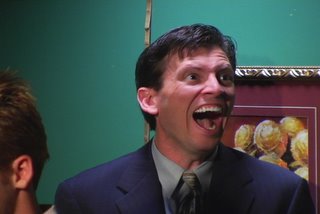 Here's a picture of me from the set of the short "Goin Down", a little "high brow" comedy about passing gas in elevators.

And...I'm goin down to San Diego tomorrow with some of my buddies from Vegas...we are going to root on the Cincinnati Reds as they play the Padres. It will be nice to hang with them.
Posted by Joe at 3:56 AM 1 comments