The Vineyard has a generous vacation policy. Last year I was able to take three weeks in August to take a family trip to Disney World and hang out at home. This August I'm taking off three weeks to make Hitting the Nuts, a movie I have been working on for nearly four years. I predict that It will be the most wonderfully exhausting vacation ever. I'm really excited to finally shoot this movie that has been trapped in my head for years.

There is absolutely no way I could be doing the pre-production work now without the greatest team ever assembled in the history of Southwestern Ohio low budget indie films. This whole project gets more beautiful and amazing as more and more people join the team. The most fun thing for me is to see how all of my friends from my whole life are converging to see this project happen.

I spent my "day off" today finalizing some of our key locations. We found a school basement in Cleves that will be perfect for the basement of a funeral parlor and a little ice cream shop by my house that will double as a fried chicken restaurant. The people in Milford have been wonderful. We'll be shooting several scenes there at various restaurants and bars. We've got Cincinnati pretty much covered.

Then there are the actors - all the key roles are being played by friends of mine from LA, Vegas, NY and here in Cincy. It is amazing how our "industry" really works. Actors go on auditions all the time, but it is when your buddy makes a movie that you get a truly good part. It's ridiculously fun to be loyal to your friends. The same is true with most of the crew positions. Mark Denney, fellow Vineyardite and the director of my first feature film - The Road to Emmaus, PA - is the cinematographer. My buddies Sid and Sam from SoCal are the camera ops. Even my old friend Jeremy Settles from Las Vegas is helping us with some gear we need. Lots of others are blowing me away already with their talent and dedication. I'm just saying...my vacation is gonna be a blast.

Btw, there's still room for some extras if you want to be a part...just email Missy at dlomceo@gmail.com and she can plug you in...
Posted by Joe at 6:45 PM 0 comments

Fellow VCC'er Shannon Shackelford is part of our arts community. I asked her for permission to post this photograph on my blog. I found it interesting on several levels - any thoughts?

To see more of her stuff check out www.shannonangel.com or her Flickr page. 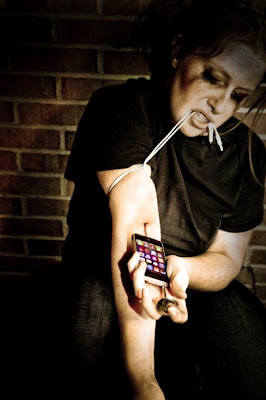 7 Years of Blogging - A Retrospective

I've kept this web journal for seven years now. A lot has changed in my life over those years. I'm really glad that I documented it, especially since I can't hardly remember things as I get older. I was in my twenties when I started blogging. I had a brand new baby boy and a two year old back then.

This post isn't so much about how much I have changed, but how much social networking has changed on the web in seven years. I loved blogging early on because I was an introvert who also enjoyed communicating my thoughts and ideas to people who might listen. Blogging allowed me to speak to my friends and family without actually calling them on the phone - and all at once. It was quite the social coupe for a guy strangely afraid of phone calls. Early on the thought of someone reading a blog who didn't know me seemed almost impossible...I mean how would they even find it in the first place? (I think that Google came to popularity soon after that.)

I remember feeling a big tension when blogger added the comments feature. All of sudden I had people talking back to me. That made it lose some of its introverted bliss. Now I had to actually engage in a two-way conversation...yuck. Plus, because of the nature of my opinions some of my comments were from anonymous haters. I turned comments off for a long time, but brought them back when they allowed the option to restrict anonymous comments.

When I moved to LA in 2005, blogger became even more important to me. There were several years where most of my posts were about my acting career. I enjoyed feeling like I could share that whole experience with those friends who had an interest in my life. Looking back on those years, this blog may have lost some of its insight, but maybe it just reflected where I was. I have had more insightful seasons than others. I do think it was more personal then...for better or worse.

Over the last 18 months, Facebook and Twitter have had a noticeable affect on this blog. I bought into Facebook early on. I like it a lot. It reminds me of why I started blogging in the first place. To my friend Brad's disappointment, I also Tweet. Though I am not sure if it will sustain itself over time. Since those networks allow me to post short daily thoughts, I've blogged less over the last few months. I am not sure what that will mean for the future of blogging, but I have no intent to quit.

Life is jam packed this summer...in a good way. I'll check back in here as I always have...even if it takes a few more days between posts.
Posted by Joe at 7:48 PM 4 comments

I turned in the second edit of my book to Standard Publishing last week. It is tentatively titled The Basiped Chronicles: The Long Night. Before that, we were calling it A Tale of Two Kingdoms. Regardless of what we call it, here is a small snippet of the first chapter. I can't share much of it online, but it's been such a part of what I have been doing lately, I wanted to share a little. It hasn't been finally edited yet, so even this will likely change some:

A flaming arrow buzzed through his gray stringy beard, barely missing his jugular. Head down and eyes closed, the old man sprinted through the darkening forest. His enemies pursued him on both sides. Guided by an inner quiet force, he blindly hurdled fallen logs and ducked his head just inches beneath low hanging tree limbs. The fiery darts assaulted him from all directions, embedding themselves into the outlying pines and firs as he sprinted past them.

Another flaming arrow reflected off the tail of his patched brown overcoat as if it were made of iron. The man sprinted faster, squeezing his eyelids tightly together as he ran.

He mumbled to himself as he flew along, “C’mon….c’mon. Get here already. I can’t hold on much longer.”

That’s when he heard it.

The sound grew louder and closer from behind him as he ran.

The man slowed to a jog. He opened his eyes for the first time in about an hour, turned to face his oncoming deliverer and smiled. As he turned he saw exactly what he had hoped for: his master, the warrior Prince of his Mountain Kingdom, barreling full force on horseback in his direction.

As the Prince drew near, the old man noticed fresh wounds on his master’s hands and arms. Bulging sweaty biceps bore the bloody slices of the enemy’s sword. Even his enormous white stead was wounded in the battle, with several simmering arrows still embedded in her hindquarters. The Prince wore plate mail battle armor, leather gloves and a plated helmet with an iron faceguard hiding his thick brown beard and long hair. He held his double-edged sword, called The Dunamas, in his right hand and the reins of the stallion in his left.

The old man stood mesmerized by his Prince’s approaching glory as another flaming arrow buzzed over his head. It wasn’t until the Prince said the man’s name that he again became aware of his surroundings.

Pops extended his hand. With one motion, the Prince snagged his friend and yanked him up to the rear of the horse. She never slowed her gallop.

“Hold on,” the Prince warned.

“Ho, Justice! Ho!” the Prince ordered his warhorse to halt and she promptly obeyed.

He intently surveyed the silent dark forest from her back. Then he screamed into the blackness, “Come out! Face your enemy and stop hiding like cowards!” At first nothing happened, but after a few moments the leaves and bushes began to rustle on either side of them.

“C’mon, come out now and show yourself,” the Prince spoke as if he were coaxing a housecat from its hiding place. Suddenly, a dark figure appeared in front of the Prince’s horse and to his right. A tall and menacing creature emerged, so black that he blended in with the night sky. He held a smoldering arrow at his side that lit up his right arm and thigh.

The dark figure snorted and kicked. He spat and muttered in an ugly unknown language. He lifted his flaming arrow, attached it to his bow and aimed straight for the Prince’s heart. Pops ducked behind the Prince in fear. With a twang, the arrow shot at the Prince. He quickly drew his sword, and sliced the arrow into two shards inches in front of his face. In a flash, the Prince dismounted and rushed his attacker. He suddenly beheaded his enemy with one arcing slice from The Dunamas.