I'd like to congratulate the cast and crew of Hitting the Nuts for winning Best Picture at the Derby City Film Festival in Louisville, Kentucky this past weekend. This is on the heels of the audience choice award for Best Feature Film at the Cincinnati International Film Festival back in October. It has been rewarding and humbling for me to accept these awards on behalf of our team. Any sort of accolade with this project just adds to the gratitude I feel for being blessed to know such a talented group of actors and filmmakers.

We will be announcing the release date for the Hitting the Nuts DVD within a week or so on our Facebook Page. Head on over and click "like" if you want the most up-to-date details about HTN.

Things are progressing with our two new movies as well. We are still on schedule to shoot A Strange Brand of Happy in August. And we will soon be announcing a title and release date for the movie originally titled "Fences" that we filmed last year. If you'd like to keep up with everything, we have a new Facebook page for Rebel Pilgrim Productions as well.

There is a running joke among indie filmmakers that if someone asks what you are currently working on, you should say, "I have several projects at various stages of development." This really means, "Nothing really, but I can pitch you something." The exciting thing is that for the first time in my life, it's actually true. We do have several films at various stages of development.

If you'd like to volunteer with our new projects you can email us at film@vineyardcincinnati.com. (HTN was/is not a Vineyard project - I was working on it way before coming here - but our current movies are done in partnership with VCC.) 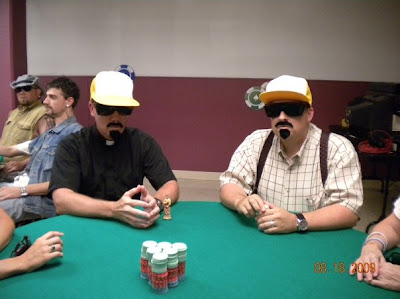 Do Justice. Do Culture.

I've been hearing things in my head again. Confident Christians say, "God is speaking to me," when this happens to them. I believe God reveals things to people...but I am never confident enough to say for sure that He is speaking to me. Of course, crazy people hear voices as well. And some of you think that I am crazy simply because I believe God could speak to anyone. So I'm either crazy or hearing God or both...

Regardless, I have two phrases that won't leave me alone. I keep "hearing" this:

"Do Justice. Do Culture."

Nothing that radical, I suppose. But the way it has been possessing my thoughts lately is a little overwhelming. I am caught by the simple idea that both justice and culture are things that can be "done" in the first place. We like to say that justice is served or administered. Culture is experienced or admired. "Doing" either of them seems to...simplified. But I think that is what I am being called into. (Now I really sound like a crazy Christian, right?)

Here's what I have been playing around with of late. For my whole adult life I have strived to be congruent - to be the same person all the time. It is my presiding dominant value and ethic actually. The second I feel incongruent, I want to die. I hate to be seen as two-faced or insincere. That's the worst. To me, that is worse than being seen as evil. In a weird way it feels more right to be evil and know that you are evil than to be evil and pretend to be good.

Not that I am all that evil, or good for that matter. But I do fancy myself a rather complex fella. I have a wide set of passions that don't normally go together. There is something about those four words - Do Justice, Do Culture - that, for whatever reason, makes sense of my life. I can hang the rest of life on the pegs of doing justice and doing culture. I don't think those are the pegs for everyone. This is where it gets tricky. As a follower of Jesus, I already know what the two most important things are - loving God and loving people. But maybe, how I incarnate that is by primarily doing justice and culture. I could easily see how one could boil life down to other phrases, like "Do Worship. Do Community." or "Do Service. Do Mission." Or whatever. But I think these are my two words. I don't know what it means for me yet. But it is the path I am on. It feels congruent. I know I am out of balance when I do one and not the other. It's exactly what I want to do - to help to build a richly beautiful city that honors and serves the poor.
Posted by Joe at 3:56 PM 2 comments

I haven't had blog-sized thoughts lately. I've only had mini-thought bursts. Twitter can be good for thought bursts. But about half of my tweets are never seen. I look at them and then erase them without posting. There was a day - many centuries ago - when Facebook and Twitter didn't exist. In the dark ages, there were only blogs. Now I find it a wee bit maddening to have so many web presences. I'm into it. Obviously. The good out ways the bad. But it's messy.

Here are some of my most recent thought bursts. These are the things I almost blogged about since my last post, but didn't.

1. I read this book and it made me ask interesting questions about the trajectory of my life: Live From New York: An Uncensored History of Saturday Night Live, as Told By Its Stars, Writers and Guests

2. I have a huge spiritual crush on Dr. Tim Keller these days. So much so that I worry I may be straight stealing his stuff. I make it my own, but he has been the initial inspiration behind my last five or six teachings at the Vineyard.

3. I read this book of Keller's last week and it would be a great follow up to anyone who was challenged by the message this past weekend. Counterfeit Gods: The Empty Promises of Money, Sex, and Power, and the Only Hope that Matters

4. I want to do culture more than I do. I think the Kingdom comes that way. I think we (most all Christians) are still afraid or unwilling to leave our church buildings more than we'd care to admit.

5. Life is better when you find a good shrink (and do what he or she tells you to do.)

6. The above shrink had me take some assessments. Turns out my main thing is that I am creative.

7. But my second thing is that I am merciful. That one surprised me...but I think I really am. I'm a fast forgiver. It has traditionally frustrated people who want me to be mad at them for a long time.

8. Two of my friends who had a hard time getting pregnant are having babies.

9. I buried my friend's father. It was maybe the best funeral I have ever been a part of. (I did very little of it.) It made me ask the following questions:

10. What do I really want my life to be about? What is my deep rooted passion that will reveal God to people?

11. I am marrying two of my improv friends in Las Vegas in May. That makes me happy.

12. I'm working hard to sell a movie. There are three hard parts to making a movie - getting the money, making the movie and selling the movie. I keep telling myself that I am 2/3 of the way there...

13. When an actor in a movie comes through the camera it is one of the most beautiful things in the world. I just saw a relatively average movie where that happened. Jennifer Aniston comes through in Just Go With It. To me, that's different than an amazing performance. It's a mysterious thing - maybe "spiritual."

14. It seems like 99% of the world is more uptight than me. People get really upset about strange things. I don't get it...but I always expect it.

15. I have almost survived my fourth winter back in Ohio. It just gets worse every year...but the strange thing is that it is making me love spring and summer more than I ever have. Maybe it's worth it.

17. Dave Workman - that dude is the real deal. Blows my mind.

18. I'm going to write a romantic comedy screenplay with my friend Holly Walker. She asked what my favorite romantic comedy was. I had to think about it. I went with My Big Fat Greek Wedding. Surprised myself with that answer.

It would have been great to get to twenty thought bursts, but I'm fresh out. This concludes the thoughts rumbling through my head...at least the ones I am willing to share on the world wide web.
Posted by Joe at 10:17 PM 1 comments