I starred in The Cure, directed by Sidney Diongzon. To see it go to my Myspace page. As of right now it is posted in the first comment space. The link to my myspace is over there in the links section --> and labeled "Personal Myspace"

With love from the lobby of the Hampton Inn in Scottsburg, Indiana -

Christmas in the Midwest

This New Year's Eve Debbie and I will celebrate our 12th Wedding Anniversary. I'd put this last year toward the top of the list to be sure. It is hard to believe that the last time we were "home for Christmas" was before we were married. After twelve straight Las Vegas/So-Cal Holiday Seasons we are flying east tomorrow morning to be with Deb's family in Indiana.

We did all of our Christmas celebrating today since we have to leave for LAX before 8:00 in the morning. Today was a very casual day. The kids got a Nintendo GameCube, which is about five years behind the times but they think it is the pinnacle of technology. I was able to usher Deb into the 2000's with her first i-pod. But mainly today was about doing very little together.

I'm looking forward to a week of rest, family, and dietary freedom...followed by a month of (hopefully) work and weight loss :)

Merry Christmas. Here's to the celebrating the unpredictable, unimaginable, irrepeateble birth of the most rebellious, counter-cultural, optimistic conspiracist the world has ever seen.
Posted by Joe at 8:53 PM 1 comments

Tuesday night Eli came down with a sore throat. I followed suit an hour later. We both were in bed for two days and went to see the doctor together on Thursday. He said that a lot of people were getting this virus that knocks you out for four or five days. This is day four and I am feeling a little better. Eli seems to be ahead of me in the healing process as he is already terrorizing his brother.

I felt terrible but was able to fulfill my commitment at Lifelines last night. Luckily (I guess) I haven't have any auditions or work since Tuesday. I was scheduled to work The Ultimate Poker show on Friday and a film called Space Reserved today and tomorrow, but both postponed the shoots until January. I do have an audition tomorrow for an indie film...things will start to shut down next week for the rest of the year though. 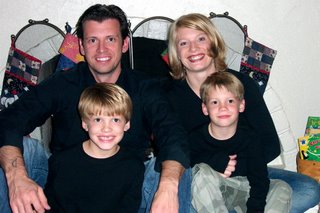 In my ongoing effort to save you from paper cuts (and myself from postage) and in the spirit of the season...I'm happy to electronically present the family in matching shirts. Happy Holidays.
Posted by Joe at 2:10 PM 4 comments

More and more I am realizing that my Improv background helps me out in tinsel town more than anything else. I have finally started to get a little connected with the casting directors and producers who focus a lot on improvisational shows. Thursday I am auditioning for the first time for Reno 911. It's an improvised show on Comedy Central. I'm excited for it.

Later the same day I have a general interview over at NBC regarding a series regular role in an improvised pilot that they said was "Punk'd meets Wedding Crashers." The show is produced by Ashton Kutcher and Jason Greenberg who do Punk'd, which I have auditioned for about five times in the last year. I've had a few series regular auditions at a network, but never a "general meeting." I'll be interested to see what it involves.

I also have a callback for a Chevy commercial tomorrow. It's been really busy and hectic since Thanksgiving for me. Today was the first day that I actually had some "free" time which I spent working on Hitting the Nuts and Lifelines.

We are having several house guests over the next few weeks...Mom and Dad are coming for a few days this weekend which should be nice.

"I hate living in LA just like everyone else, but I make the best of it because I am virtually unemployable anywhere else in the nation" -a quote as best as I can remember it from Matthew Perry on Studio 60 last night. It made me laugh.
Posted by Joe at 8:21 PM 3 comments