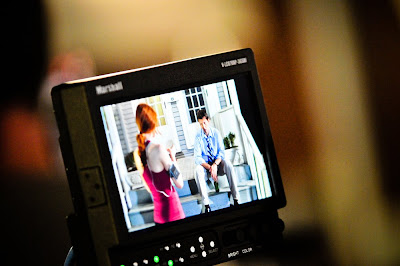 Week one of A Strange Brand of Happy is safely in the can. We have a great team that really started to gel toward the end of the week. We spent four days in Norwood shooting at at duplex owned by a great guy named Tony. He couldn't have been nicer. Before that, we shot one day at Queens Tower in Price Hill. We were able to get some amazing shots of the city from the 14th floor. The very first day we shot at Dewey's Pizza in West Chester. I loved Dewey's before we shot there and my opinion of them is through the roof now. The manager was over the top hospitable - feeding us lunch AND throwing in a few extra pies for the crew as we wrapped. I couldn't be happier that they have chosen to be a part of this movie. As far as talent goes, Rebecca St. James was in last week for several days. She is now gone for a while and will return for the last few weeks of the shoot. My friend Holly Walker is here, playing a role but also helping out with the crew. She is the Leonard DiCaprio to my Martin Scorsese. (She has been in all four narrative films I have made. Because she is crazy talented.) My buddy Ben Keller stole every scene his was in with me last week...and I couldn't be happier about it. And my friend Bekka Prewitt came home to Cincinnati from LA to play the role of "Terry." She nailed it. Today we move onto to shoot at a bar in Fairfield. My friend and locally based stand-up comic, Geoff Tate, will be playing the bartender in these scenes. Lots of Hitting The Nuts alum acting this week including Chris Day, Nick Ghizas and Mike Betette. Speaking of...Mike is coming in from LA for only one day. While he is here, we are planning on doing a little free improv show at Taza this Saturday, August 27th at 9 pm. Mike, Holly Walker and I will be doing a three person show with some time at the end for other improvisers to jump in. It should be hilariously funny so long as I stay out of their way. They are two of the most talented improvisers on planet earth. See this Facebook link for more details about the show Thanks to all of you who helped us out last week with food, locations, extra work, etc. I will do my best to keep you updated as this week progresses.
Posted by Joe at 8:50 AM 0 comments

Making a movie is a journey in three legs. The middle leg is the most chaotic, fun and collaborative. It is the part that most people think of when they think about making a movie. It starts with principal photography and ends about a year later with a final cut. Today, A Strange Brand of Happy begins a 25-day shoot in Cincinnati.

Day one of shooting is probably my favorite in the whole process. It marks the end of leg one - the conception phase that moves the project from idea to script to financing to pre-produciton. Conception phase of this movie has taken 957 days. (Brad Wise mailed me the idea for this movie on December 31, 2008.) This day also marks the beginning of a new phase. Today the vision and dream of this story moves from a few dozen people to a few hundred. I have never experienced anything like the collaboration of a film set. It is a strange concoction of unexpected joys, surprises, problems and solutions. There are daily moments of fear and dread followed by waves of elation. It's life at its best for me.

After this phase, we will move into the multi-year process of securing distribution, marketing and delivery. That phase has its moments, but this one is my favorite. Today is the day that we look back on more than two years of hard work and say, "That was really difficult, but we made it! Now we have earned the right to really go to work."

We'd love for you to stay updated on the progress of the movie. Pick your favorite way to connect from the links below and join the journey with us!

So You Want to Be an Author? Actor? Pastor? Etc?

I get a lot of emails from people wanting to become something they are not yet. What I mean, is they want to become an author, a screenwriter, an actor, a filmmaker, or even a pastor. These are all things I have done and currently do, so it makes sense people would reach out to me for advice, I suppose. I did the same thing when I first realized I wanted to do any of those things.

None of those desires are necessarily bad, but they are often misplaced. They seek a validation that comes from vocation. It is completely natural. I still fall into it myself. But it is not the best way to get there from here.

Let's say you have a job now, but want to do something else. I have come to believe that there is only one genuinely responsible way to get there - start now. But don't quit your day job.

You will never make it to the shelf at Barnes & Noble or Blockbuster with your idea. (Mainly because neither will be around anymore by the time your idea gets to that point.) You may get a book in the Kindle store or a movie on iTunes someday. But, for your sake, I hope it is not your first book or movie. You might get a starring part as an actor on Broadway or in a big budget Hollywood movie, but unless you happen to be young, gorgeous, super talented and related to someone in the business, I wouldn't count on it being your first role.

You start becoming an author by writing. For free. For whoever will read what you write. I always recommend starting a blog to anyone who wants to be a writer. I blogged for about eight years before I got a book deal. I wrote the first few chapters of about ten books before anyone ever even read a manuscript. I have at least a half dozen screenplays on my Mac that have never seen the light of day. Mainly because they are bad. My experience is that by the time you get something you have written published or produced, it doesn't feel like that big of a deal...but like the next logical step in a lifelong process.

You start becoming an actor by acting. For free. For whoever will let you act for them (while keeping your clothes on.) Community theater can be great, but it can also be terribly painful. Pay your dues. Be in painful local productions - churches are often, sadly, a great place to start. Work for free in student films...they are generally bad too. I believe that you have to become the best bad actor in town before becoming the worst good actor. If you love acting even though you know you are a part of an artistic train wreck, then you may have what it takes to keep going.

You start becoming a pastor by pastoring people. For free. Love the people around you. Pray for them. Lead them to Jesus. Model a better life for them. Maybe someday you will find a community that financially supports you for it, but my experience is that isn't always better, just bigger. The vast majority of pastors in the history of Christianity didn't receive a dime for caring for people.

I think this philosophy applies to most everything. Except maybe brain surgery. Don't do that for free. But for the arts, it applies. Don't desire to be a professional at something until you have proven to yourself that you are willing to do your art simply for the love of it. From someone who has done it both ways, trust me when I tell you my greatest writing, acting, filmmaking and pastoring experiences were all unpaid. It doesn't get any better than doing it for free. Getting paid for it just lets you do it more. And more isn't always better. So...go do it.
Posted by Joe at 11:51 AM 4 comments

We just released this press release about 15 minutes ago. We are all very excited about the cast assembled. There are many more talented people involved in the movie not mentioned in this short release including many local actors and a predominately local crew.

If you live in Cincinnati and want to contribute, head over to www.astrangebrandofhappy.com to learn more.

Rebel Pilgrim Productions, in association with Vineyard Cincinnati, will begin principal photography of A Strange Brand of Happy, a romantic comedy, on August 15, 2011. The movie will shoot entirely in Cincinnati, Ohio. This is the fourth feature film in five years for the company. The company’s previous film, Hitting The Nuts, won the Golden Ace Award for Superior Filmmaking at the 2011 Las Vegas Film Festival last month.

The movie will be directed by Brad Wise and produced by Joe Boyd, Jim Nyberg and Philip Sarnecki. It expects a theatrical release in 2013.