We lost Charlie this morning. Here is a note from his wife, Angie:

Charlie passed away peacefully this morning with family and close friends by his side. His 37 years were packed with so much life and joy. In the coming days we will be sure to post information about services and funeral arrangements. It would mean so much to mean for all of you to be there to remember him.
Thanks for your support through this. He fought a good fight.

Charlie loved God and the church. He worked hard at everything he did including this fight in the hospital. All we can do know for Angie and the kids is pray. I will keep you posted here with ways to reach out once I know more.

And I trust that my life will bring honor to Christ, whether I live or die. For to me, living means living for Christ, and dying is even better. But if I live, I can do more fruitful work for Christ. So I really don’t know which is better. I’m torn between two desires: I long to go and be with Christ, which would be far better for me... Philippians 1
Posted by Joe at 11:59 AM 1 comments

Over a decade ago I met the electrician of the MGM Grand Garden Arena in Las Vegas. We went on a wild kingdom-seeking ride together that nearly cost us both our sanity. I think we'd both say it was worth it. Jeremy spoke at my home church in Las Vegas for a few minutes recently. Nobody talks about Jesus exactly the same way Jeremy does. I'm proud of him.

(That's my buddy Jim Zartman's voice you hear in the video below...feel free to pause it. I won't tell him.)

This weekend I spoke from Acts 2:42-47. I'd say that no other section of the BIble has messed with me more than this one. The picture painted of the early church in action is mesmerizing in its simplicity. Strangers from every nation suddenly thrown together radically sharing all they have within the reality of a supernatural visitation from God himself. Who wouldn't want that? To know that there is a God and that He is present. To be fully accepted and valued within a generous family. To see others join the community everyday as Jesus draws them in. To me...that's the Kingdom come. To me...that's church. Or at least what church can be or will be.

This understanding led me to reject the "organizational church" for about half a decade of my life. On my most frustrated days, I was overstated - condemning those who do the sorts of things I do now - things like taking a paycheck from a "church" or encouraging what I called "program centered ministry." On my better days, I was rather level headed about it all. I knew that I did not have to be part of a 501(c)3 organization to be the church. It was ok for others, but I was done with it all.

Overtime I became more comfortable being around organized Christianity again. Today I'm part of the system. When I came back to vocational ministry, those who thought I "went off the deep end" sent me notes saying that they had been praying that "I would return to church." It was OK that they didn't get it...

Today my more staunch anti-institutionalist friends likely see me as a bit of a sellout. I can understand that. We were on a crusade to prove it could work without all the fringe stuff - we'd wax poetic about churches without buildings, budgets and big shots. I still respect them. I still hope what they are doing works. And whether they see it my way or not...I still think I'm one of them.

In my early twenties I began to see myself as a missionary called to North America. Since then I have, for the most part, lived up to that calling. It was primarily missional thinking that brought me to reject the way I had always thought of church. I simply didn't believe that the institutional church was on track to see a redeemed North America. Somebody had to try something else. It was my missiology (in conjunction with some burnout and restlessness) that fueled my second career as an actor. And it was another missional conviction (in conjunction with some unexplainable Holy Spirit stuff) that brought us back to Cincinnati.

My life vision is to see a church (defined as one of God's new families on a mission) within walking distance of every person in North America. A big organization like The Vineyard can encourage that in significant ways. I've thrown my whole heart into the mission of the Vineyard so easily because it fits perfectly into my personal vision and mission. Personally, I'm not all that into the idea of big churches unless they can produce small ones on a daily basis. And call them what you want - small groups, house churches, church cells, ministry teams...I don't care what you call them. I call them churches. And I want to see one in every neighborhood in Cincinnati as soon as possible.

When it starts to really happen it will be too messy for any organization to control it anyway. That's how we'll know it is from God.
Posted by Joe at 1:43 PM 5 comments

Sean Michael and I just returned from visiting Charlie and Angie at the hospital. Angie was overwhelmed, but in good spirits. Charlie's vitals were not stable this morning, but they have now regulated. He is sedated and may be for a long while. As we were leaving they were putting Charlie in a special bed that would rotate him and help his lungs to heal. It looked like something from the NASA Apollo program.

Charlie is now stabilized, and the pulmonologist believes that “he will continue to improve at this time, but not sure how fast that will happen”. They believe that the aggressive treatment they have him on will continue to add to his stability. He is currently being sedated so that he can heal and rest.

Mason Vineyard has set up a webpage to give daily updates. Those of you interested can sign in and get daily info there. http://www.caringbridge.org/visit/charliematthews
Posted by Joe at 6:43 PM 0 comments 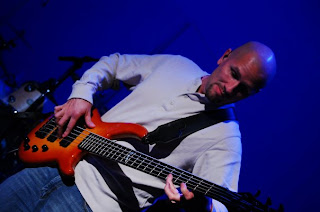 Please pray for our friend Charlie Matthews. Here's a short update from Dave Workman from a few minutes ago:

I have a critical need for your prayers immediately. The pastor of our Mason churchplant, Charlie Matthews, began feeling flu-like symptoms last week. I spoke for him this past weekend at his church, but a couple of days later he went into the hospital with double-pneumonia. Yesterday they put him on a ventilator and suddenly this morning he “coded”, was revived, and now on life-support. Please pray for him; the Mason church just had their new “re-launch” in a new building, with Charlie as their new pastor. Please pray for his wife Angie and their two young children.

Thanks,
Dave Workman
Posted by Joe at 1:31 PM 2 comments

I periodically face a struggle. Several times each year I am asked to teach a class, write an article or simply talk about the art of storytelling. I've even had some limited interest from some folks who want me write a book on the topic. I'd love to do that. Here's the rub: I don't really know much about how I actually tell stories. I've read a few books, but they didn't really help me much. I have never taken a class on storytelling. Everything I do or know is completely innate. The one exception might be my improv and acting training which bleeds through at some level.

I wonder if anyone out there has made this jump. I think about artists or musicians who become teachers of art and music. How did you do that? My storytelling process begins and ends with staring at a wall for an hour, then telling a story. In some ways it feels like trying to teach someone to be 6'2 with brown hair and a hot wife. It's just who I am...not what I purposely decided to become.

A fun piece from a local news station about the Vineyard Prom this past weekend:

And also from channel 9: