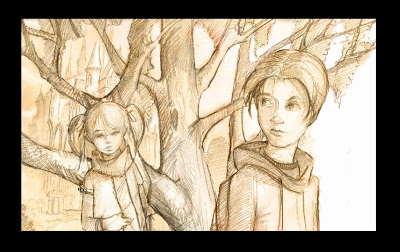 I haven't really looked at my book Between Two Kingdoms for about a year. Debbie had been reading it to the kids over the last few weeks. (They were so excited to read their dad's book that they penciled it in about 18 months after the release.) Last week, Eli asked me to pick up reading. "How often do you get the author of a book to read it to you?" was his pitch. Manipulatively masterful. Considering I am pretty sure he can read for himself.

So I did...and continued a few nights until completing it last night. Through the process, I realized that I had not read the last chapters of the book for two years or longer. It was an odd experience. I couldn't remember writing several sections. (Maybe my editor made significant improvements...or maybe I just forgotten. Hard to say.) I was struck, most surprisingly, by the fact that I enjoyed it. I think creatives tend to look back on their art with embarrassment. ("I could do much better now," we think.)

I was most struck by the chapter I wrote introducing the evil character Senkrad. He loomed as a faceless, terrible force throughout the book, but appeared for the first time toward the very end. As I read, I remembered how easy it was to write his dialogue. Evil is easy for me to imagine. I have always felt that evil is mostly good with a subtle twist. His words even made sense to me as I read them to Eli. "This Senkrad guy makes a pretty compelling argument," I found myself thinking. I'd like to share a section of the chapter called The Other Prince with you here. Hopefully it will makes sense out of context.

Tommy found himself in the middle of a huge bed covered with a thick, white, down comforter. The room was bright, and if he had not known better, he would have thought that the sun was shining in through the many windows. Touching his head, he discovered that his wound had already been neatly bandaged. He also realized that he was now wearing white, silk pajamas. His hooded robe was gone, as were his clothes—including his jacket.

He sat up in a panic.

A man sat in an easy chair across from him. The man had his legs crossed casually and was sipping tea from a cup. He had a sparkle in his eyes and a kind, relatively young face. Though Tommy had never seen him before, the man seemed strangely familiar to him.

“How’s your head, Tom?” the gentleman asked. “Do I know you?” asked Tommy. “Search your heart. I think you do,” replied the mysterious man. He stood up from the chair and walked over to a small bar. He poured freshly squeezed orange juice from a glass pitcher into a tall, chilled glass and brought it to Tommy.

“Drink this. Your breakfast is on its way.” Tommy sat on the edge of the bed, looking suspiciously at the orange juice.

“Tom—or Tommy, if you prefer—if I had wanted to hurt you or poison you I would have done it already. Drink your juice. Two gentlemen ought to be able to trust each other, yes?”

Tommy was parched and he gulped the juice down. It was the best-tasting drink he had ever had in his life. The man returned to his chair and crossed his legs once more.

“Would you like some more?” He asked, with friendly eyes. Tommy shook his head no. “Are you . . . Senkrad?”

The man laughed. “Senkrad? No. There is no Senkrad, my brother. It’s all a very silly myth. My name is Adam. This is my home.”

The man seemed so familiar to Tommy, like an old friend or relative. It was making Tommy crazy as he tried to place his face.

“I’m confused,” Tommy admitted. “Where are Amanda and Bobby?”

“They are being helped by some of my friends, Tommy,” said the man. “How about you think about yourself for a change? Why did you come here in such a hostile manner? I would have been happy to invite you in and discuss things, like two reasonable, well, adults. I don’t understand why you wouldn’t give me a chance to be your friend, before deciding to make me an enemy.” He almost sounded hurt.

“I didn’t just decide to make you my enemy, Sen—Adam. You are the one who started all of this. If you really are the prince of this world, then you owe us all an explanation. You made the Long Night, not us,” said Tommy.

“I don’t like to think of it that way,” said the man, with another friendly smile. “I’m really more of a servant than anything else. I serve everyone who lives in the Lower Kingdom. Think of me as the Servant-in-Chief.”

“How is all of this darkness and destruction serving these people?” Tommy swung the covers off and sat up in the bed.

The man looked steadily into Tommy’s eyes. “How old do you think I am, Tommy?”

“Take a guess. How old do I look?” “Maybe thirty,” said Tommy. “I’m twenty-nine,” he said. “I have been in this Kingdom for hundreds of years, but I’m only twenty-nine. Eternally twenty-nine.”

“I don’t understand your point,” said Tommy. “I know how old you are. You are seven. You look like you could be my age, but you aren’t, are you? You must be embarrassed of your real age down here in my world; and I understand why. What does a seven-year-old know about life? About death? About trust or wisdom or anything of any importance? Don’t misunderstand me, Tommy. It’s not your fault you don’t know many things . . . most seven-year-olds simply aren’t that informed yet. Don’t you ever want to grow up a little, Tommy? Don’t you ever want to know a little more? To be . . . older?”

Tommy rubbed his forehead. Was this all a bad dream?

“Tommy? I asked if you ever want to be older?”

“I don’t know . . . maybe I’d like to be older sometimes, but I know I don’t want to die, and old people eventually die.”

“That’s where you’re wrong, Tommy,” Adam placed his teacup on the table beside his chair and leaned forward. In a near whisper, he continued, “I’m still alive. I haven’t died. I’ve found the perfect age and stayed there. A few years older than this and my body would start to break down ever so slightly. I’d become just a little weaker day by day, until my body would eventually wear out, as you say. A few years younger than this and I wouldn’t be as strong and mature as I am right now. This is the perfect age, and I wish everyone could be twenty-nine forever. That’s all I’m trying to do . . . just help people live better lives. Share what I know, what I have.”

“But how did you do it? How did you get to this age and then stop growing?”

“I willed it. You can too, Tommy. You can . . . most people can’t. Most people need someone like us to will it for them. That’s what the Long Night is all about. The sun is what ages my people, you see. Those harmful rays. I’m trying to stop them from aging. Once I do, I have a plan to bring light back into the world. I wouldn’t leave those I love in darkness forever. Not like your King has done to you.”

“My King would never keep me in darkness,” snapped Tommy.

“Oh, well, I mean no offense. He gives you light for your eyes, yes, but what about your mind? He keeps the important things from you, Tommy. Tell me, what has your King taught you about the mystery of death? Has he told you anything about death, except that you should avoid it? What has he told you about the Messengers? What about the ocean that surrounds the island? Where does it go? What is its name? What of the stars, Tommy? Where did they come from? Where do they go when night fades? What has he taught you about how these two kingdoms were formed? Who created them in the first place? Surely, someone did? What has he done for you except make you a leader and force you to wear a ridiculous coat that actually prevents you from leading well?”

Tommy sat on the edge of the bed, motionless, yet feeling pulled in a thousand directions. “I feel sick.”

I think this chapter was easy for me to write because it is so similar to the constant chatter going on silently between my ears. In a world where everything is doctored with a strategic spin, including - maybe especially - matters of spirituality, life can get confusing. As I have attempted to pray in different ways over the last few weeks, I begin to notice that the chatter lessens. In prayer we catch glimpses of our true Prince. We see his face, hear his voice, know his presence. Knowing Jesus is the only way I know to identify his many imposters. I think I am getting a little better at knowing the difference between the real and artificial these days. I hope the same is true for you.

*Art provided by Mark Haas for Between Two Kingdoms