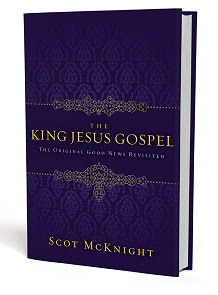 I just finished reading The King Jesus Gospel by Scot McKnight, one of my two favorite books of the year. (The other is The Lost World of Genesis One by John H. Walton, which coincidentally was quoted in McKnight's book.)

McKnight is an author whom I have never read, but I have seen his name bantered about from time to time. I had briefly reviewed his 2010 article in Christianity Today that thoughtfully tackled an issue I have often struggled with - the congruity of the gospel of Jesus and the gospel of Paul.

Around a decade ago I read Dallas Willard's book The Divine Conspiracy. It was through that book that I first encountered the gospel of Jesus Christ. That may seem odd to say. I had been a Christian my entire life, graduated from Bible College and been a pastor for five years before reading it. My life could easily be divided into pre-Willard and post-Willard. Willard showed me that the gospel was the Kingdom come - not just sin management.

(Side note: I think The Divine Conspiracy is beginning to loom as a pivotal once-in-a-generation work in modern Christianity. Many evangelicals of my generation look back on that book as a kind of secret passage leading to a more Kingdom-centered tangible expression of Christianity.)

From Willard I found many other authors ready to aid in my exploration into this new and improved gospel - thinkers like Stanley Hauerwas, Will Willimon, John Howard Yoder, Hans Kung, and N.T. Wright. Over time, N.T. Wright rose about them all as a trusted voice - even beyond Willard in many ways. Wright just seemed (and seems) a half-step ahead of so many of us. (The irony that an Anglican Bishop in England has become the patron saint of post-modern post-evangelicals in America is beyond explanation to me.)

When I picked up The Jesus Gospel I immediately noticed that it had two different forwards - one by N.T. Wright...the second by Dallas Willard. How could I not read on?

I hope this doesn't seem somehow conceited, but what I felt while reading McKnight's book was an intense measure of agreement and thankfulness. Reading, particularly reading theology, is often best when you find an author who stretches your common perceptions and assumptions. That is what Willard, and later Wright, did for me. Certainly, McKnight did that for me in stretches through this book. But it wasn't so much the head-tilting moments that won me over as it was the head-nodding moments. With nearly every paragraph I found myself thinking, "Good, someone else sees it that way too...and someone smarter than me. Maybe I'm not crazy, after all!"

I feel like, for instance, I am constantly harping on my evangelical friends about the danger of over-emphasizing personal salvation. McKnight confirmed in me that my prophetic instincts in that regard are grounded. The gospel is not fundamentally about your sin problem. It is about Jesus...and more specifically about Jesus being Israel's Messiah and the rightful Lord of the entire cosmos.

When in doubt as a "preacher," I tell stories about Jesus - or about his people, Israel. McKnight encouraged me that what I am doing is pure gospel proclamation. In short, he confirmed for me that gospel is what I have come to think it is - simply Jesus as King. He is the good news. His life, death, resurrection and appearances in the context of the story of Israel is what changes everything. Those of us who believe his story are sent to proclaim it as historical testimony. We don't have to persuade people to action. We just tell the story and the story does the work. It is good news. Perhaps more accurately, he is good news.

I rarely use this blog as a commercial, but I unashamedly encourage you to buy this book. It may do for you what The Divine Conspiracy did for me ten years ago.

I'm enjoying a blog to which he contributes, http://www.patheos.com/community/jesuscreed/

It's got hideous layout, but solid content keeps me coming back.

McKnight is one of my favorite authors; I just picked up this book 2 days ago. The leadership of our church is seeking to reclaim the "complete" Gospel and I'm hoping this book will give us some more insights as to doing just that. Thanks for the recommendation, I'm looking forward to reading it!

Just finished this book last week. A lot of "I'm sure glad other people believe this" kinds of moments. Good review!